Warning: "continue" targeting switch is equivalent to "break". Did you mean to use "continue 2"? in /home/marchona/public_html/safariinternational.com/wp-content/themes/jupiter/framework/includes/minify/src/Minifier.php on line 227
 Russia – Kamchatka Combo – SafariInternational 
Warning: filemtime(): stat failed for jupiter/min/full-scripts.6.1.js in /home/marchona/public_html/safariinternational.com/wp-content/themes/jupiter/framework/functions/enqueue-front-scripts.php on line 49

The hunt on the biggest brown bear in the world is done on foot or on horseback along the brooks full of salmon or in the fields with berries where bears feed themselves. Daily one can meet 3 to 10 bears so that the hunter has the possibility to choose a big trophy.
The Moose hunt, the largest Cervidae in the world, with a spectacular trophy, is considered one of the most beautiful hunts that can be done in Russia. In Kamchatka the hunt is done with horses or walking and stalking during September and October in the roaring season when the moose are very active, starting off from the base camp (tents or small shelters of the professional hunters) searching for Moose for one or two days and regularly checking the open areas in the woods where they regularly come to graze.
There is also the possibility to hunt Kamchatka Snow sheep in the surrounding mountains. The hunters will reach the top of the mountain by helicopter and after they harvest the sheep they will walk down along the rivers for the bear hunt.

Assistance at the airport in the arrival/departure in Petropavlovsk Kamchatskij, ground transfer to the heliport closest to the hunting area, helicopter transfer up to the base camp and back, services of game-scouts and professional guides in the hunting area, camp organization, first treatment of the trophy, government fees for the organization of the hunt. 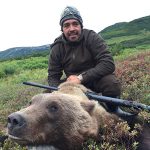 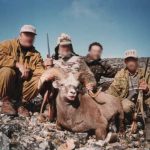