Warning: "continue" targeting switch is equivalent to "break". Did you mean to use "continue 2"? in /home/marchona/public_html/safariinternational.com/wp-content/themes/jupiter/framework/includes/minify/src/Minifier.php on line 227
 Russia – Lynx & Bear – SafariInternational 
Warning: filemtime(): stat failed for jupiter/min/full-scripts.6.1.js in /home/marchona/public_html/safariinternational.com/wp-content/themes/jupiter/framework/functions/enqueue-front-scripts.php on line 49

The hunting area for Lynx is located in the immense central Siberian forests, around the Baikal lake.
The only truly efficient way to hunt this large feline is by following tracks in the snow, so that the hunt can be done only during the winter months. It is a very difficult hunt, which requires long transfers on sleighs following the tracks of the animal.
This type of hunt is not physically adequate for everyone, so that our guide often uses horses, specially trained for the purpose of stalking in the snow and a pack of dogs that force the feline to climb a tree and block it there until the hunter arrives.
The bear hunt in Siberia is done at the den in winter months up to February 28th. This hunt is done by approaching the bear den, which had been previously found by the local guides, who, with the aid of specially trained dogs, will incite the bear out of the den. This hunt is one of the most dangerous ones, because the hunter is forced to shoot from a very close range, but will remain protected by two professional hunters that will stay at his sides. Lodging is provided in heated wooden hunting houses, while the services are on the outside.

Organization of the hunt with local guides, English speaking interpreter for every group, full board in the hunting houses without services, transport by 4×4 vehicle or on horseback during the hunt, hunting permits, first treatment of the trophy.

Air fares, transportation from the airport to the camp, (300 US $per group), visa, weapon import permits, hotels before and after the hunt, tips, drinks and gratuities. 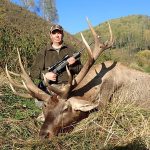 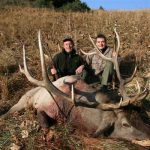