Warning: "continue" targeting switch is equivalent to "break". Did you mean to use "continue 2"? in /home/marchona/public_html/safariinternational.com/wp-content/themes/jupiter/framework/includes/minify/src/Minifier.php on line 227
 European Russia – Capercailzie – SafariInternational 
Warning: filemtime(): stat failed for jupiter/min/full-scripts.6.1.js in /home/marchona/public_html/safariinternational.com/wp-content/themes/jupiter/framework/functions/enqueue-front-scripts.php on line 49

Capercailzie is one of the oldest birds on Earth. It is a large forest partridge. This bird has almost disappeared in most of European countries but it is still plentiful in Russia. Capercailzie hunts are traditionally done in spring. It is a very exciting hunt. Capercailzie hunting takes place early in the morning in the twilight. The hunter approaches the animal, singing in the branches. During singing Capercailzies become deaf and this gives the hunter an opportunity to shoot. This hunt is for groups of 3- 4 hunters. After arrival in Moscow transfer to Kirov region is by Trans-Siberian Railway which moves through Russia from West to East.

Invitation, gun permit, veterinary certificate, meeting and drop off at the airport, all transportation (jeeps) in the hunting area, accommodation and food in the camp during the whole tour, service of professional guide, all serving staff including one interpreter (english and german speaking) per group/ camp, field preparation of the trophy. 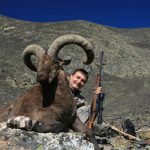