Warning: "continue" targeting switch is equivalent to "break". Did you mean to use "continue 2"? in /home/marchona/public_html/safariinternational.com/wp-content/themes/jupiter/framework/includes/minify/src/Minifier.php on line 227
 Spain – Roe Deer – SafariInternational 
Warning: filemtime(): stat failed for jupiter/min/full-scripts.6.1.js in /home/marchona/public_html/safariinternational.com/wp-content/themes/jupiter/framework/functions/enqueue-front-scripts.php on line 49

There are two Roe deer species officially recognized in Spain, the European Roe deer, in the north of Spain, which populates over half of the Iberian Peninsula, and the Moresco Roe deer, in the extreme southwest, close to Gibraltar, which is a miniature Roe deer, very dark, but with impressive trophies. Over the last decade in Spain in general a very unusual phenomenon has been occurring: Roe deer trophy quality in a circumference of 100 – 200 km north of Madrid, in areas with continental climate has become so high that CLOSE TO ONE THIRD OF MATURE TROPHY ANIMALS REACHES THE GOLD MEDAL. This area has become the only one in the world where one can guarantee Roe deer of 150 – 200 points.
The hunt is organized by stalking on foot and searching with the vehicle, during the month of April, but one can also hunt waiting. Lodging is foreseen in rural houses or small hotels in the hunting area.

Transport to/from Madrid or Malaga airport, professional guide, use of a hunting car, lodging in local hotels, first treatment of the trophies. 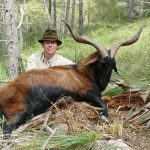 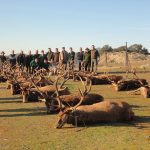